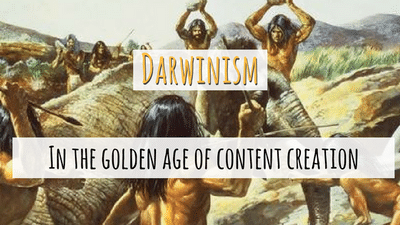 While most folks are familiar with the end of the dinosaurs (Cretaceous period), far more life was wiped out below the sea. This mass extinction was at least the fifth mass annihilation scientists have identified, where 80% of all life was obliterated.

As we are such an arrogant and self-centered species, few of us rarely think of what a small percentage we make up of life on earth today, and how we are an even smaller slice of the pie of the overall life that has strode, slithered and swam on the earth.

What does this have to do with being an author?  Well, everything and nothing; I mainly want to keep you entertained with evolution and dinosaur metaphors while I talk about the ecosystem that authors live in and the changes going on in that ecosystem. Ready? Let’s go…

One storyline is that open digital publishing (Amazon, Kobo, iBooks, Flipkart) have destroyed publishing.  They allow any hack to publish and they are in turn, killing off retail book sales. For some, this is their reality.  For others, this new era after the digital publishing meteor struck is a new golden age of content creation.  For those who choose this view of reality, life is pretty good.

A lot has changed in the publishing world and even more, has not. Indie authors should understand their place in the ecosystem and how they may need to adapt so they do not die.  If this is the golden age of content creation, what will you need to do to thrive in it and what could be your undoing.  I won’t get into what might be the next cataclysm but will explore what I believe the important adaptations are required to survive in the current era.  Let’s go mix some economics and ecology.

The basics of economics are supply and demand.  The process of supply and demand equalizing determines the price.  In the ecosystem of content for reading, demand is the reader and supply is the author.  In a perfectly efficient market, your book goes to every reader who would want to read your story delivered in the format they desired, paying the maximum they are willing to pay.  Everything else is friction, and friction is not cool. (imagine Neegan saying that last sentence to Rick on the walking dead

So here is our little circle of life.  The Reader-Writer Organism, a symbiotic relationship that the whole ecology is based on.  If it fails, then all will die.  Readers read, excretes cash, Writers consumes cash, excretes story.  This can be done over and over with more and more readers and writers, but since they don’t have my magic story – cash transfer system, we have the marketplace to do this exchange and the market is supported by the friction.

Friction reduces the ability to connect the reader and writer and absorbs portions of what the reader pays. The friction (costs) come out of the value created by the writer.

In the Trad Pub Era

The Technology acceptable to the mass market required a physical product: a book, movie or CD to tell the story.

The network facilitator had a system where a human being vetted and curated products to an audience they looked to serve.  To reduce costs, the physical product was mass produced and a system evolved where various customer engagement networks tried to reduce friction to secure more “value” in the delivery system.

Readers had limited sources for content consumption.  The channels were controlled and regulated.  The channel regulation, typically called gatekeeping, was partially designed to vet product that would be better consumed, but the real friction we now know was created by how inefficient the process was in connecting content creators to content consumers.  The system was weighted towards delivering more of what was successful in the past as the risk-reward on content diversity was low.

Instinct was to look for more writers who could serve the demand that the network provider was already serving.  I’ll talk more about this in other blogs.  The wind up for this era is for the readers and writers in it, the system worked pretty well.

This is typically referred to as market disruption, not nearly as cool imagery as the Amazon Digital Publishing Meteor smashing into the trad pub world.

Scientists presume that not all life was eliminated in past cataclysms, and certain creatures like gastropods are still crawling after 444 million years.  So not everybody dies, and the ones who survive, adapt, and many times thrive in the new conditions.

Conditions created after the meteor strike are much different now and for some the perception is doom, but for other survivors, the conditions to thrive are better. Now you may be expecting the comparison of trad publishing to the dinosaurs, nope.  Trad publishing is a biome. A large naturally occurring community of flora and fauna creating a major habitat. This habitat still exists after the meteor strike, but the strike has created new biomes.  Biomes that produce less friction and thrive on that lower level of friction.

The Reader Writer Organisms adapted to this new age by moving to a biome where environmental conditions were more suitable. The combination of the search engine function and data analysis of customer buying behavior has changed all shopping.  This isn’t about bypassing the gatekeeping system of traditional publishing.  It a more hospitable ecosystem for the circle of life. Yes, the trad pub system is still working, but its conditions are less favorable to other biomes

The abundance of life

With less friction, we now see that the demand is much higher than anyone thought.  This is a good thing because with this demand there will be more need for supply.  The demand is further augmented by the digital product lowering the cost of goods to where the supplier can access additional demand through reduced price.  Think of it this way, the reader consumes content and excretes cash, the author consumes cash and excretes content.  A portion of the cash goes to supporting this biome and a biome that can create less friction and live on less friction will thrive because more of our little circles will grow there.  Right now, it just so happens that the best ecosystem is Amazon. The point is that the biome won’t survive without creating the ideal conditions for the flora and fauna it needs.

This next point is critical for authors to understand.  In the new indie era, more millionaire authors have been created than in all prior publishing history.  There will be even more in the future (woohoo) but your probability of becoming one has not changed (what?).  Here is what I mean, and this has been validated by surveys I have done, author earnings I have received, as well as other sources.

The distribution of earnings has not changed, only the (n) population has changed.

The distribution (bell curve) is exactly the same as it used to be when it comes to the percentage (probability) of attaining a certain revenue level as an author. What has changed is the population that the distribution is applied to.  The cold, hard facts are that 80% of authors will never make more than $10,000 in a lifetime from writing.  Sixteen percent will make around $10,000 a year; everyone else making more is in that final four percent, including the millionaires.

% chance you make over six figures 1%

While the pool of demand gets bigger it now also creates more content producers.  In turn, more demand is met but also more cash is consumed by the growing pool of suppliers that are being created.

This new era is abundant with life because the cataclysm changed the ecosystem in ways that reduce the friction and exposes the demand. The heavy hitters of the trad pub era are not organisms who can adapt, but biomes that the essential organisms are migrating away from or not choosing to habitat in the first place.

Authors tend to feel weak and defenseless, first against the big five, now Amazon.  They are portrayed as the big looming beasts or predators.  I don’t like this analogy, instead, they are a biome that is reliant on the reader-writer circle of life.

How to not just be a survivor, but how to adapt.

It is my belief that as a content creator, you need to focus on the most economical and robust system for connecting to the demand.  The shortest path with the least friction will be the one that will last or replace the existing solutions. While a direct 1:1 relationship is the shortest path, it may not be the easiest for everyone.

So how do you not only survive but thrive?

What about the Biomes?

The biomes (platforms) that thrive will be those that best nurture the money creating organism through eliminating friction and helping to kill off parasites. If there is another cataclysm that destroys the Amazon Biome, I guarantee it will be replaced by a better, more efficient one, that the reader-writer organism can move to and then flourish.

Joe Solari Is the author of “Advantage”

He seeks to help authors be better business operators and excell at the business of writing.