Game of Cults email 23 of 45: The World Outside and the Picture in our Heads

Last week, I had a little fun showing you some persuasive tools to get people to buy into a pseudo-science. This week, we’ll learn that you live in a pseudo-environment that you construct.

Walter Lippmann opens his book Public Opinion with the story of an island in the Atlantic Ocean where English, French, and German citizens lived detached from society.

News came to the island by steamer every sixty days. One day, when the ship arrived and the latest newspapers unloaded, the islanders learned that the world had been at war for over forty days. Suddenly, the island’s whole culture changed.

Even though World War One had been waging for over a month, it wasn’t until the news arrived that people began looking at their neighbors differently. Friends became enemies.

Perception separated facts and reality, based on that updated information. In Lippman’s words, the pseudo-environment of the island’s inhabitants changed.

Lippman is considered the father of modern journalism. If Le Bon was the guy that let the genie out of the bottle, Lippman was the first to try to use the genie’s powers.

Lippman posits that we live in fiction, or what he calls a pseudo-environment. The idea is that as an individual, the world is too complex for you to understand fully, so you form a limited view of the world that you can comprehend and, by doing so, create fiction.

This is at a conscious level. Science has already proven that our brains purposefully process and provide limited information to our conscious mind at an unconscious level. In many cases, you begin acting on the most essential information to survive. Your hand recoils from the hot stove before you consciously know it is hot or perceive the pain. In other cases, you never act because your unconscious filters out the stimulus.

We further process information into a pseudo-environment at a conscious level—or fiction.

By Fiction, I do not mean lies. I mean a representation of the environment, which is made by the man himself to a lesser or greater degree. The range of fiction extends from complete hallucination to the scientists’ perfectly self-conscious use of a schematic model or his decision that for his particular problem, accuracy beyond a certain number of decimal places is not important. A work of fiction may have almost any degree of fidelity, and so long as the degree of fidelity can be taken into account, fiction is not misleading. In fact, human culture is very largely the selection, the rearrangement, the tracing of patterns, and the stylizing of what William James called the “random irradiations and resettlements of our ideas.”

Lippman had a pragmatic approach. It wasn’t that man was stupid and couldn’t form his ideas. It was that reality was overwhelming, and culture came with too much bias for us to be able to perceive an objective reality.

Look at the current war in Ukraine. Depending on what side you align with, one leader is made into a symbol of leadership and freedom, and the other is the personification of evil. We will get into this more in our next email when we delve into Edward Bernays’s work on propaganda, which Lippman influenced.

What is interesting is Lippman’s understanding of this dichotomy. On the one hand, the press had a duty to provide the news as objectively as possible, yet in his mind, this was an impossibility given the subjective nature of the reporter.

Furthermore, the press significantly influenced the formation of this pseudo-environment and influenced public opinion. The day the news arrived on that isolated island, close friendships were broken based on the change in perception.

He was seen by many as the greatest threat to the democracy that had ever existed. Some called for his impeachment.

His presidential win was considered a fluke resulting from a fragmented Democratic party running multiple candidates split over slavery.

His win was the final straw for some that broke up the Union. 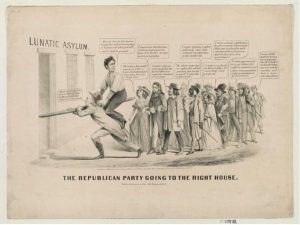 After hundreds of years and constant messaging, public opinion has changed to view his presidency positively. Imagine what it must have been like for him to face so much animosity that he was constantly doing both “too much” and “too little” to fix a situation.

The point of this little segue into the life and times of Lincoln is twofold. First, to show that there has never been a consensus in public opinion throughout time, and secondly, to have you do a short thought experiment.

How did you form your opinion of Abraham Lincoln?

Think hard about what movies you saw, books you read, lessons you were taught, and conversations you’ve had.

Can you consciously delineate how you develop your sentiments about Abraham Lincoln? There is no way you could have met him, so everything has been secondhand.

I first brought up how public opinion is formed around historical figures in Advantage. I shared how your view of Albert Einstein was purposely crafted by an organization called Greenlight.

“ALBERT EINSTEIN IS ONE OF THE
MOST FAMOUS, ICONIC, INFLUENTIAL, AND UNIVERSALLY
ADMIRED PERSONS IN HUMAN HISTORY.”

That’s their tagline for Albert Einstein. Does it resonate with you?

I’ll come back to this idea in a minute and explain why you should be thinking about public opinion and messaging, but I need to talk about Lippman further.

Lippman shares how daunting it is to influence public opinion in his book. He talks about the massive effort that went into messaging in the United States during the World War One era. Millions of words were printed and reprinted, spoken, and wired with a concerted effort to control the narrative. While it did have a massive impact on public opinion, it didn’t create a homogenous one.

Keep in mind some significant differences between then and now. First off, the average person consumes far less information from two local newspapers, usually around fifteen minutes a day.

There was no TV, radio, or internet, and most newspapers were under the control of a few people delivering a common message.

Very different from today’s onslaught of media trying to get a slice of your attention.

Lippman’s views on this pseudo-environment led him to use this knowledge to craft messaging throughout his career for politicians and companies.

Media in the 1950s and ’60s was heavily influenced by the Almond-Lippman Consensus.

We don’t live in that world anymore. Now we face an environment where there is an endless number of places to get information and the sources. Those looking to control public opinion see contention as equally influential as consensus. Going so far as to doctor and fake source material, lie and gaslight the public to make it through another election cycle.

Stereotypes are a vital part of the pseudo-environment. We need confirmation of our beliefs and the fiction we created, so when those around us act as our fiction dictates, we feel validated.

While much of what I’ve shared in this email has been dismal and points to how easy it is to manipulate the public, I want you to take solace in this knowledge. Certainly, knowing is your first defense against manipulation, but if Lippman is right and we are destined to live in a fantasy filled with stereotypes, let’s take advantage of it.

Back to Einstein and Lincoln.

Both were men with failings and now are dead. Only their fictions live on and continue to influence many. Right now, I’m using both in my narrative to make a point. Others use them to make other points.

How are these fictional characters any different from the characters in your books?

Maybe you think they are because once they were real men or because they provide some scientific or historical significance that they were part of, but they are not.

This brings us back to your marketing and what I touched on earlier: you are in the emotion business.

Let me be very specific about what I’m looking to do for you. I’m trying to discover tools and processes to influence groups to act in accordance with your wishes.

The desire for this influence isn’t a bad thing because it’s the only thing that is strong enough to influence the market as a whole.

The mistake that’s made is that we look outside of what we have rather than at the power of the tools we currently control.

You can create influence at the individual level and then use this influence as the common connection to a group around your identity.

Like Albert Einstein and Steve McQueen, your characters can be crafted and used as marketing tools.

The more you can get your readers to connect with these fictional characters, the deeper the personal commitment to the brand. The more they strive to integrate your imaginary world with their pseudo-environment, the deeper they will identify with others that have the same sentiment about your brand.

Let’s look at Harry Potter and JK Rowling. Studies have been done on the cultural differences in perceptions and associations with Harry Potter.

We all need someone, at least one person, that we feel gets us, with all our quirks and complexities.

However, when we feel we’ve found others that are like us and agree on a common fiction, we find fellowship invalidating that fiction.

Have you thought through what that fiction should be?

Not the fiction of your story but the brand. Being deliberate in your brand’s fantasy creation gives you power. The more you craft the fiction and get your readers to adopt and enjoy the brand you’ve constructed, the deeper they will be committed to its success.

Thank you for your attention,

Where Greenlight has focused on building fiction around a deceased personality, your work is more significant. There needs to be sentiment and ideas about all of your characters as well as the settings and story world.

How far can you blur the lines and create a pseudo-environment around your brand? Could your characters have a Twitter or LinkedIn account?