Spotify Buys Findaway: What Does it Mean to Authors? 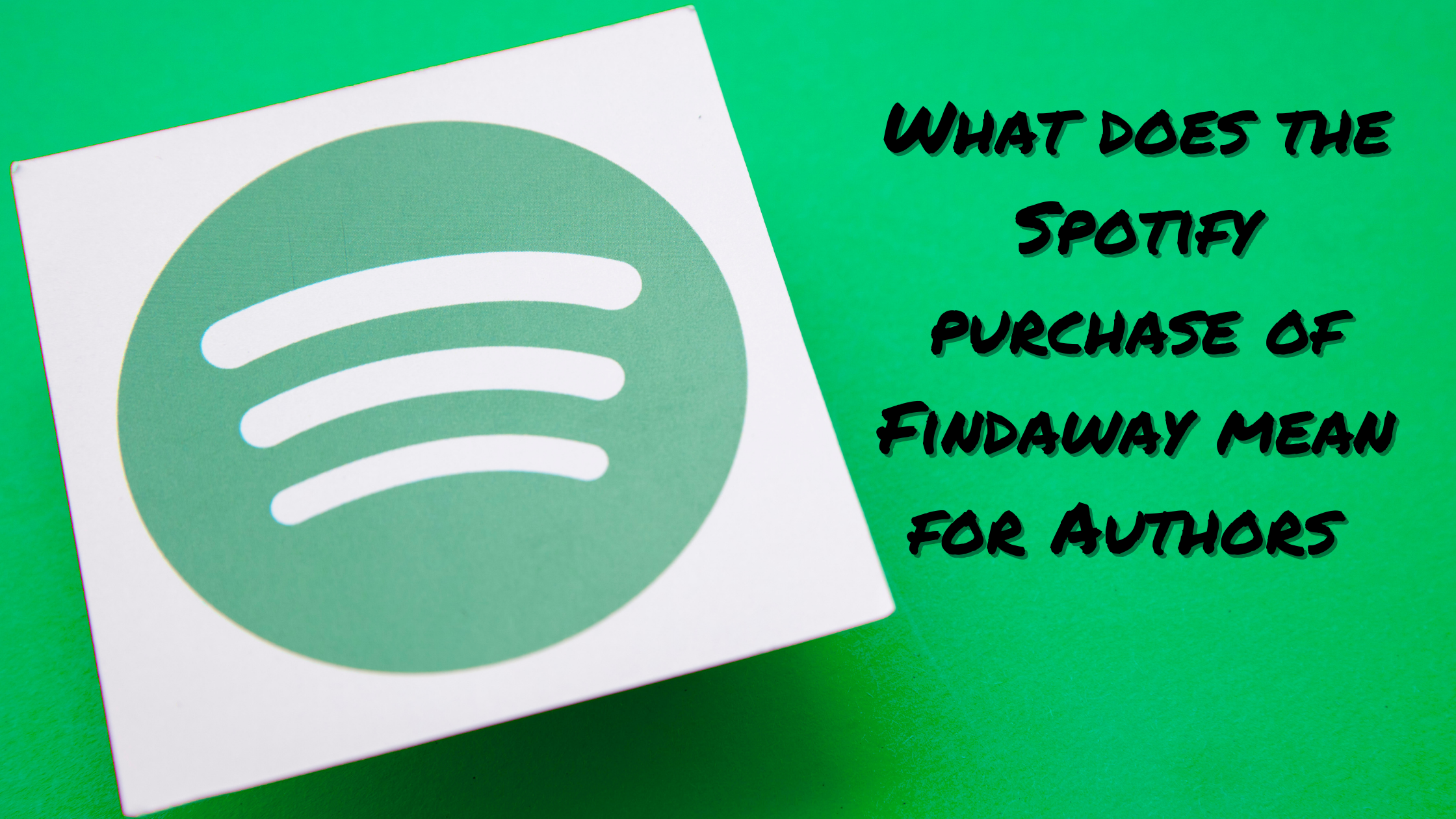 I was sitting in the McCarren Airport when a client texted me about the acquisition of Findaway by Spotify.

The two of us have been talking about the players of audio and how the industry will reshape for the last year. I don’t have a crystal ball to see how it will all look, but I do have a story to share that can help. I will share with you my north star while navigating the audio waters.

For this to make sense, let me share a story from earlier in my career where I watched an industry go through massive change.

Years ago, I had a business in the water treatment industry. The industry went through a consolidation and acquisition phase. I ran a small business that was tied to one company that was over 80% of sales.

The CEO of this company made commitments to get the share price to double. That company’s management focused on what investors were looking for as a result—doubling of the share value within a specific time.

If you’ve heard me speak or read my books, you know I believe investor needs should be a driving principle of a business. Understand that this has to strike a balance between what the customers of that business desire as well.

Foreign conglomerates came into the space because water is a crucial resource and has diverse uses in many industries. Food, power, paper, mining all require water to produce a product. The narrative was you become a diverse global water treatment company or become part of one.

One of the interesting steps the two largest US companies took was an early retirement of staff to reduce costs and deliver better earnings. This strategy was typical when getting ready for a sale.

In the short run, this made sense, but it didn’t consider the true competitive advantage they built these companies on. These two companies had spent decades recruiting young engineers out of college, then training them in professional sales techniques, like the IBM system, SPIN selling, or counselor-salesperson.

These young salespeople then went into industries and became vital support for their customers. I observed frequently where the chemical company salesperson had been at a plant longer than his customer’s employees and knew more about their process than they did. In these remote mines and rural papermills, that salesperson was connected to the community.

When the offer for early retirement went out, many salespeople qualified through years of service yet were in their career prime. A large group quit, then a few months later started their own company.

About a year later, the company that was 80% of our business was sold to a French infrastructure company that bought two other water treatment companies. In a matter of months, my entire business was in jeopardy. My strongest relationships now were reporting to others. My customer was now a tiny part of an entirely new strategy that didn’t look like what it was doing in the past. To make matters worse, there was duplication. People and suppliers were cut because they offered redundant services. The term for this is synergy savings.

I had one of those “it’s just business” conversations. Those that were our strongest allies had lost their status and were now marching to others’ orders.

But it isn’t just business when you own a small company. Your employees are your family and friends, and it’s not just a job.

I now had to scramble because none of my contracts would renew. I had time, but not much, to reinvent the business.

The interesting thing is that even more salespeople quit these big companies to start their own businesses.

They believed in what they were taught about service and support.

I won’t bore you all the gory details or how everything played out.

Here’s the important part of this story…

Over the next ten years, that industry enjoyed above-average growth. The big boys never enjoyed that growth. Most shrunk because they were too busy buying, integrating, slicing, and dicing companies, creating value for shareholders. Yes, shareholders got more value but not through organic growth—it was all financially engineered.

All the growth went to the little guys. The industry ended with more specialty water treaters than it started with. It didn’t consolidate. It fragmented.

Because the guys running the business were focused on only one side of the equation. Creating value for shareholders and not on getting closer to their customers. They forgot where the truly sustainable value comes from in solving their customer’s problems.

What they sold was a solution to a problem. The solution required not just a commodity chemical but its application and understanding of the process. The chemicals could be made cheaply and sourced in many places. What they gave way were the wisdom and relationships that those salespeople had.

When the salespeople quit, they had the knowledge and relationships and went to guys like me to get the equipment and companies like Dow to get the chemicals. They could reduce prices, make more money and become their own bosses. The customers benefited by getting better service at a lower price.

So what should an author that makes money from audiobooks be considering when they hear Findaway’s owner is now reporting to a division head at Spotify?

What does my tale of twenty years ago have to do with your audio business?

Let’s go through some of my thinking and why it matters to you.

Some audiobook publishers are financial products.

Understand what a potential partner’s business objectives are. Is the sole purpose to build something to sell?

There is a lot of money to be made in private equity and mergers and acquisitions. Understand the timelines and have it clear how you want your titles to be handled. In the end, their value is tied to the quality of the titles they have under contract and the length of those contracts.

Don’t be surprised when your good friend at company X lets you know he has been promoted or is leaving for another company. With him will go anything that isn’t a signed contract.

The gap between the slide deck and reality.

A lot happens when a company like Spotify decides to start acquiring, and the plan contacts reality. An acquisitions team could buy things just because they are incentivized to scale. They rarely ever are involved with integrating what is bought.

The statement “Nothing going to change” is code for I have no clue what will happen. Of course, it will change. The worse situation is when there isn’t a plan for how it will change. Rarely do integrations go well. You have to understand that in big companies, the integrator often finds out about transactions that they will be getting the pleasure of integrating when the public does.

Rarely do acquisitions pay off. More often than not, there is an industry urgency to do a land grab to be better set for the future. Little though goes into if they will be able to get all the pieces to fit.

If you haven’t read my post on keystone mutualism or understand these concepts, spend some time doing so. When looking at everything that is going on, get back to basics. What can you do to get closer to your customer?

The reader writer relationship is what matters. Everything else is friction. Sure, we need to take on some friction to increase visibility or aid in the customer experience, but technology will continue to reduce intermediaries and friction. Build your content business by collecting customers and creating content.

If the number in the announcement is correct and we will be see 24% compounded annual growth for the next five years to take audiobooks from three billion dollars to fifteen. Spotify and their competitors are going to need an enormous about of content.

This is the only thing that matters. In fact, through these acquisitions, they create a higher dependence on content creators to produce.

What will they pay for?
Spotify is on a buying spree. It’s a mix of content, technology, and distribution. Maybe I’m wrong, and someone is looking at how the puzzle will go together. That’s good for those producing audiobooks for there to be a diverse competitive market. It’s just my take that this would be the first time all the pieces fall into place through mergers and acquisitions.

Keep in mind that there have been different purchases. They bought Findaway for an undisclosed amount. Was it more than they paid Joe Rogan for his podcast?

They paid Joe Rogan over 100 million dollars, and he will continue to have creative control and options to go elsewhere in the future.

Dave Chappelle makes around twenty-five million for each special he does. It remains highly rated and watched. In the end, Netflix and Spotify, Amazon, and their competitors need to bring new content to keep people subscribed.

What should I do, Joe?

Focus on customers and content. Don’t let these events distract you. The content you create and the relationships you have with your content consumers define your success. The best situation is being able to minimize the friction between your customers and you.

If you plan to get that Joe Rogan deal, then build a business that has great content and the closest relationship possible with your best customers.

My opinion is that through a direct business model you’ll have the most control. It may take longer and cost more, but it will be yours to grow or sell.