The Tragedy of the Commons: Part 1 of 3

Part 1 of 3 The Tragedy of the Commons Series

In the spirit of Halloween, I’m going to talk about vampire bats. The only sanguivorous mammals.

There are only three species of mammal that feed solely on blood.

We consider vampire bats the only parasitic mammals, although you may have some friends or relatives that perhaps have parasitic traits.

We need to talk about vampire bats to protect you from becoming a vampire yourself.

At my old house, we had this huge oak tree where several bats were living. At dusk, they would begin flying around in circles, scooping up insects.

We loved our bats because when they were around, there wasn’t a mosquito to be found.

The common vampire bat has adapted to feed on livestock.

It is believed that this is just another adaptation in a long line of adaptations.

The vampire bat’s ancestors only fed on bird blood. After settlers brought herds of cattle, sheep, and hogs to America, they opened an endless buffet for the common vampire bat.

Domesticated animals have other consequences.

In 1833, William Forster Lloyd wrote a pamphlet on his lectures, “Two Lectures on the Checks to Population.”

He shared, for the first time, the idea of overuse of the common by the commoners. Garrett Hardin later distilled this idea into the Tragedy of the Commons. 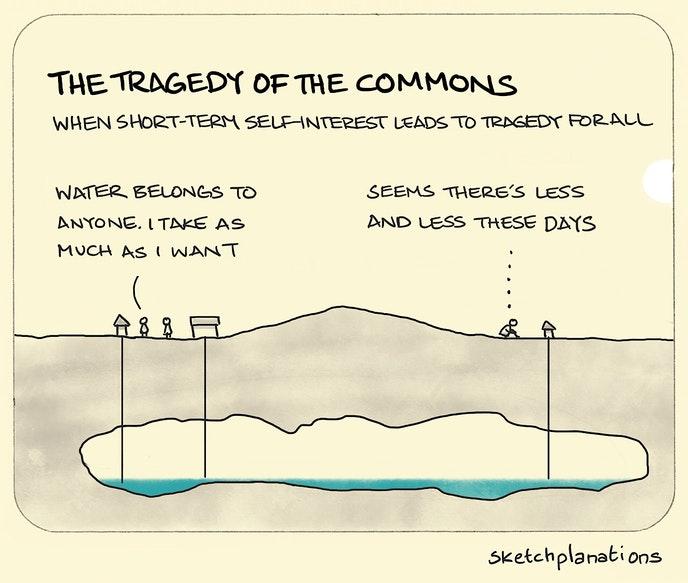 You and I are ranchers grazing our cattle in the same pasture and doing well in cattle sales. Each year we keep adding more cattle because business is profitable.

Overgrazing destroys the entire ecosystem, not just our cows starving.

The tragedy of the commons is everywhere. It causes overfishing, boom and bust cycles in the hydrocarbon industry, and the attention market.

There is a finite amount of attention.

Attention has a half-life.

Those whose attention we seek are building a resistance to interruption.

We are collectively putting more stress on the commons, overfishing the waters, and putting the short-term goal before the long-term aim.

In many markets where the commons’ tragedy is happening, the feedback loop amplifies malicious behavior.

Look at commercial fishing. As it gets harder to catch fish, the price of fish goes up.

Those that can catch fish can continue to invest in novel ways to catch fish; bigger nets, longer-range ships, sonar.

The problem gets gradually worse, but those that can increase capital spending continue to succeed until suddenly they have no more fish to catch.

We are experiencing the same thing in the market for attention.

As you compete for attention:

You try to figure out what to do next to stay in the game.

You slowly become a vampire.

We can only speculate what happened twenty-seven million years ago that caused some bats to drink blood as its only food.

The adaptation since has been massive.  Not only has the bat physically and metabolically changed, its microbiome has also altered⁠.

Because blood is the sole food source, even the behavior in a colony of bats has changed. Bats will regurgitate in others’ mouths to feed bats that didn’t find a source of food that night. Scientists have documented the behavior and the ability to keep track of reciprocity.

Are you grossed out yet?

My biggest fear for authors is they don’t find another way. As they focus on the fastest ways to gain attention and sell more books, they will lose themselves to the lust for attention.

They won’t sense the slide down the slippery slope of the tragedy of the commons.

One day you’re no longer able to do anything but race from gambit to gambit for attention.

It’s not like a vampire bat can just start eating bananas or insects. The incremental adaptations permanently change it; it can’t go back to being an omnivore.

You won’t be able to go back either.

What’s worse is while authors and digital marketers become more perverted by the negative feedback loops focused on conversion. It destroys the attention commons. Eventually, we become what kills off the herd we depend on.

This is the future publishing faces.

We’re experiencing it right now, the incremental destruction of the commons. Increased ad costs, low return on ad spend, people being disgusted with social media, and the more and more competitive product advertised on your sales page.

In the next email, we’re going to talk about elephants and bison ranching. I’ll show how by changing our focus from attention and conversion, you can focus on a sustainable holistic business.

We will explore building a process that puts customer delight and investor needs as a higher purpose – even above selling more books.

We zig when others zag.

In the meantime, let me leave you with this.

With every decision, ask, “What will happen next?”

If you plan to run a promotion, ask what will happen next?

Will you get the right readers?

Will they pay full price?

Think a few moves down the chessboard to make sure the decision today doesn’t lead to further tragedy for you on the commons of attention.

P.S. You’ll only be seeing two more emails over the next sixty days. Then the new season starts January 2nd, 2021. I titled it  “Wynn-ing Ways” and it will be a story-based learning experience. If two emails aren’t enough, then get your copy of Advantage. If you already have a copy, go through it again as the concepts apply to Wynn-ing Ways.

Read Part 2The Tragedy of the Commons: Part 2 of 3