Back in 2008, I took the wife to Las Vegas. The mortgage crisis was in full effect. When we checked into the Bellagio, the clerk offered to upgrade us to a 1,500 square foot suite for another $50 a night.

Times were tough for the casinos.

The room had a panoramic view of an inactive construction site, the unfinished Aria. It was in jeopardy of never being finished.

When at the bottom of a cycle, things look dismal.

On my most recent to Vegas, Suze and I ate at the Aria. It’s one of the nicest and busiest hotels on the strip.

With COVID, the whole strip is hurting again.

Up and down cycles…

Way back in email one, I mentioned Ray Dalio’s everything is a machine video.

He is an advocate that our economy is cyclical, and there are cycles within cycles.

I agree with Ray and believe his idea has application in publishing.

Today we start with discussing the up and down cycle of a launch and how launches connect to build your career.

Launches are the hands you play to progress in the overall tournament.

I’m going to talk about how rank gravity sucks, the difference between visibility and discovery, and how to avoid the emotional roller coaster of the ups and downs in publishing.

I’ll leave you with my model of an author growth curve. Understanding the model will help you plan better for how you’ll grow your publishing business.

Let’s begin with some definitions. I know I interchange discovery and visibility when talking about titles in the market.

I shouldn’t. They are different.

Visibility: the state of being able to see or be seen.

Discovery: find (something or someone) unexpectedly or in the course of a search.

Without visibility, you can’t be discovered.

Conversely, I can see your title but not comprehend that a book suits my taste.

Discoverability is a process that allows a reader to get to know what you offer in their time frame. A funhouse or maze that gets them into the story world.

There is active and passive discovery. We need a system that works for both.

Active discovery is when a reader is ready to read and looking for the next author to devour. This is when good copy and a call to action can deliver a result.​

Passive discovery is a system where you allow a potential reader to find and understand your offering on their time. It should be the most substantial part of your discovery process.

This season is about building the systems that will cause better future launches.

Don’t worry about how things went in the past, just how we can make the process right for better results in the future.

Your start point is whatever reader stock you have. Now build indoctrination and retention feedback loops, then launch a book.

With your book’s launch, you’ll get some visibility through the audience you have buying the book and those conversions triggering Amazon to show the product to more people who are similar to those who bought.

In the beginning, it will be very little.

Then just as things are looking up, rank gravity kicks in…

Rank gravity is a real thing.

It’s where your books settle out with no advertising or launches. This is a natural level of visibility that leads to passive discovery, then read-through.

You can see it in your aggregate monthly sales or average title rank.

I imagine it as the natural position of your work in the body of all results.

After analyzing thousands of titles in multiple genres, I see the same curve. Sure, there are nuances, like the intercept and the slope during the various phases. Still, all titles go through an initial peak, then a decay to a regular orbit around the mass of eight million titles on Amazon.

Now you may say to yourself, “Wait a minute, Solari, what about getting visibility that becomes viral?”

Yes, those step changes happen, but you’ll come to rest at a new plateau where you’ll settle again and from there you’ll lift when you launch.

I’m trying to provide a system the builds up the components that cause those lifts—community and strong ties (trust).

That means that you’re going to have these waves. An early lift where your book has the favor of your existing audience consuming it and then the downturn to a new plateau.

In the words of Agent Smith, “It is inevitable.”

It’s natural to try and stop that fall, or at least use any method at your disposal to make the peak as high as possible and slow the descent.

Your increased sign-ups and engagement will be a mix of new readers and past readers becoming more engaged.

The next launch rolls around, and you start the entire cycle again. Up it goes, then it falls.

You can get wrapped around the launch axle as you interpret noise as resposes to your tinkering.

Instead, think of the progress from plateau to plateau rather than from peak to peak. 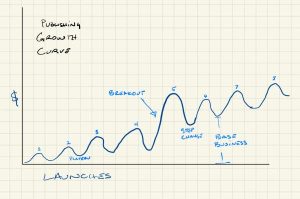 That initial lift triggers a near-miss effect where you thought you were just one click away from your book going viral (you’ll learn more about this when I discuss slot machines in a later email).

Then, as gravity takes hold, so does depression—your emotional pendulum swings with rank.

This is the emotional roller coaster of publishing. What makes it more depressing is it can be ten, twenty, or fifty books before you see one of those career-changing step changes. The entire time you question if you’re worthy of the endeavor.

The funny thing is, those who have had the step-change have new pressures.

They worry that this recently found success will suddenly evaporate, that the fans will find out they’re fake, or that they are now beholden to the fans to pump out books at the rate they read.

None of these are true.

Stringing a series of ups and downs together where the later phase results in a higher plateau is how publishing works.

I think launches are steps to your summit. One may cause an exponential jump in readers. That’s awesome when that happens!

We don’t leave that to chance. We IMPROVE THE PROBABILITY OF VISIBILITY through the systems we build.

After the lift from your launch, you settle to a new plateau. Consolidate your forces for the next ascent.

Get your community ready for the next ascent. Like climbing a mountain, there are base camps where you get acclimated to the new altitude and then move to the next level.

It takes forty days to summit Everest. There are six camps on the way up to stop and get ready for the next altitude change.

Now, publishing is different in that you can suddenly see a blast to a new sales plateau, but these happen because of the work to get your community up the mountain with you. It is their purchases that drive your visibility and their words that get others to buy your books.

Does this mean advertising won’t help?

It can assist with visibility, but it won’t defy gravity.

I have spoken little about Amazon and advertising on that platform. When someone is on Amazon, they are poised to purchase.

If you are looking for visibility at the bottom of the funnel when someone is ready to buy, Amazon ads offer the on-platform choice. The problem is they also provide it to your fellow authors, all looking to pull a potential reader off your sales page to theirs.

Another problem is that Amazon wins no matter what is purchased and gets paid solely for visibility.

By understanding that you have a series of these ups and downs, you can deal with the emotions and the reality of visibility.

Rather than fighting the downturn by extra spending, wringing of hands, and beating yourself up, let the book fall to its natural orbit and get moving on the next launch.

Once the book succumbs to rank gravity, it’s too late, and the real failure is if you have not put in the indoctrination loops to retain your new readers. The onboarding process that keeps more fans and gets those who are interested more engaged will deliver bigger launches in the future.

Some of this indoctrination is very similar to your discovery loops because as your backlist gets bigger, it will help new readers discover what you have written that they haven’t read.

Next week I’ll share some tactics and psychological tricks that casinos use to keep you playing. These are powerful tools that shouldn’t be ignored.