Joseph Schumpeter is the Austrian economist who coined the phrase creative destruction.

He believed that innovation drives the economy, resulting in newer and better things. These new ways, by their very nature, destroy the older, less efficient methods.

For example, the whaling industry was once vital to the global economy. It no longer exists. Those pesky rock oil drillers destroyed it with their kerosene. Later, Edison’s light bulb wiped out all the lamp oil sellers, and so it goes… 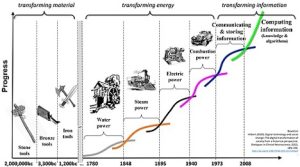 Schumpeter was a fan of Kondratiev’s wave theory. The Soviet economist theorized that technological waves within other waves make up predictable cycles in economies. These cycles create expansions and contractions. He identified the phases of expansion, stagnation, collapse, and recession. 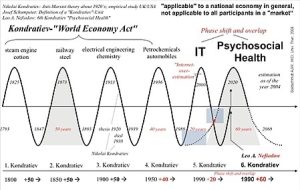 Dalio’s thoughts on the debt and deleveraging cycles are based on wave theory. My credit spent on goods and services creates growth. However, when I pay down my credit with the creditor and deleverage, there can be a shrinking of growth.

Waves are natural and integral to spontaneously organizing systems like the publishing market. It’s the nature of self-correction and feedback loops to over and under compensate, seeking equilibrium. Human interaction amplifies these cycles through our emotional swings of enthusiasm and skepticism. Our hearts overrule our heads and drive the booms and busts.

I’m going to firm up some ideas in this email about the cycles within publishing. I believe every author’s career today is a sum of all these cycles.

Publishing is an ever-changing, accelerating, no-holds-barred business. The market is self-organizing, driven by collective behavior, and will have natural ebbs and flows. As you read through my list, think about how each cycle influences your business now or will in the future. These waves are summative and subtractive. The combination determines your career.

Throughout time, there have been fundamental shifts in technology that disrupt and create the creator economy. For example, the steam engine and manufacturing innovations made the mass printing of books possible. The digital age birthed ebooks and audiobooks.

Who knows what innovation waves may destroy and create within the content industry? What we know is that these cycles are shorter and more disruptive. While innovation creates uncertainty and can destroy parts of the economy, history has shown that the overall market grows, making a bigger pie for all of us to enjoy.

Throughout time, economies have always been driven by cycles of expansion and contraction. Booms and busts. Ray Dalio ties these cycles to introducing credit and its deleveraging of debt. But what happens when we tinker with these cycles and delay deleveraging? At some point, does our tinkering to ease the pain of an economic shock result in a more painful correction?

There is no doubt that larger economic cycles can influence your business. Also, economic shocks can disrupt the momentum.

Many industries have seasons. There is seasonality in publishing, and depending on your genre, these can be amplified. Middle school book sales, holiday pushes backed by traditional publishers, Black Friday, summer reading surges, and Amazon Prime day can all impact sales we see (or don’t see) online. How will the seasonal influx of consumers impact your publishing schedule? If we can anticipate a surge in sales in a particular genre, what choices can we make to maximize the benefits and minimize the risks?

Your career cycle has several influences. The first is where your business is in its growth curve. If you’re just starting and working toward breakeven, you’ll have different cycles and risks than a mature publishing business. Respecting this curve is essential to your personal business growth.

Then there’s where you are at in your career concerning your energy and effort. This influences your business and its ebb and flow. Burnout is real, and if the creative engine isn’t firing on all cylinders, it will take its toll on business growth.

Where you are in a series will also shape your business. Early in publishing a series, there is traction for building readerhip As series adoption builds, launches and read-through improve. Later audience building has less impact as a series gets long in the tooth or ends.

I’ve shared dozens of slides demonstrating the sales decay curve of a title. While the intercept and slope may shift a little, the curves are identical. Your audience bingeing a new book drives an immediate boost in sales, and when the existing audience is exhausted, there is a steep drop.

All of the waves are interconnected. They can amplify and negate each other. For example, suppose you have a positive career cycle during an economic downturn. In that case, you may not feel the larger downturn, or conversely, the bigger economic impact could dampen your career upturn.

We look to understand these waves, not to give ourselves more excuses as to what we’re up against, but to understand how we can ride these waves. Wave riding up and down takes skill and emotional resilience.

This little sketch shows the various phases of a wave. 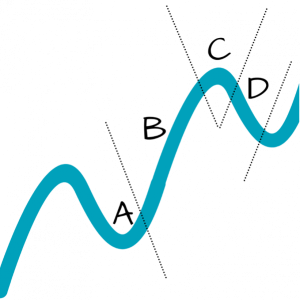 The ego boost and endorphin rush of success leave us wanting to let it ride or double down our investment in B and C. Problem is, it’s a wave. It will crest and recede, right after its highest peak. Do you have the discipline to back off and prepare for the downturn when the outlook is still positive?

Can you separate your worth and emotions from a downturn? Too often, we think it’s something we’ve done that is driving the result. Every book eventually falls from its launch high, but are we going to accept that as a natural wave or take it personally?

When are these readers going to get it and finally buy more of my books? we might ask.

This week, take out a piece of paper and list out these waves. Estimate what phase you believe each of these different waves are in. Is technology in B (in an upswing) and the economy a C (plateauing)? Is your career at A and a series at B?

How do the waves have different magnitudes?

How are they amplifying or canceling each other out?

Think through how these wave phases influence your business and your headspace. Are you taking the influence of the waves personally or accepting them as natural phenomena?